Evolving Skies will see the release of a two-player “Build & Battle Stadium” box, which will feature two Evolving Skies Build & Battle Boxes! It will also come with a variety of extra goodies, including four extra booster packs, dice, and Energy cards. It seems the product wants you to battle against a friend and introduce both of you to the latest set — like a personal prerelease experience.

The box will release on September 10th for $59.99. This is two weeks after the set’s August 27th release date.

Enter the Pokémon Stadium—Ready for Battle!

The high-powered Build & Battle Stadium includes everything you need for two players to prepare and battle. Inside this box you’ll find:

There are no reviews yet. 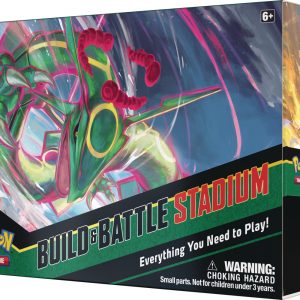